On Friday March 10th the Bargaining Committee was in Mediation from 9AM until 11PM (again).  Mediation has begin at 9AM Saturday March 11th and is currently ongoing.

On Thursday March 9th,  CUPE 1334’s Strike Support Committee organized a Picket Painting Party in the Courtyard of the University Center.  The Party was well attended and enthusiastic with visible support by members of CUPE 1334, CUPE 3913, UGFA (Faculty Association), ATU 1189 (Guelph Transit), U of G Students and the CSA.  Even the Begging Bear got into the action with a sign of it’s own (See photos under What’s Happening Now).

CUPE 1334 continues to organize and will be holding a Picket Captain’s meeting on Sunday March 12th at 1PM where picket assignments will be issued and communication training will occur.

The Bargaining Committee was in Mediation from 9AM Thursday March 9th until 11PM.  Mediation has begun at 9AM this morning, March 10th and is currently ongoing.

See below for a Press Release that was recently released!

Union representing trades, maintenance and service workers calls employer’s latest offer ‘betrayal’ as two sides bargain in advance of Monday morning lockout/strike deadlineGUELPH, ON – The union representing 240 trades, maintenance and service workers warned that negotiations with Guelph University are moving ‘backwards, not forward,’ raising the likelihood of a work stoppage that could begin as early as Monday morning.“I felt the most recent offer that came to us was a betrayal,” said Janice Folk-Dawson, President of Local 1334 of the Canadian Union of Public Employees (CUPE 1334).The union is attempting to ensure the protection of good, stable jobs that support the community, including securing permanent employment for 39 current temporary workers.

“In good faith, we believed we were discussing a path to permanent work for workers who in some cases have been here for seven years. Somehow, that morphed into a proposal where these workers and many others would then risk being transformed into permanent employees – for as few as eight months a year,” said Folk-Dawson.

“That’s not just a bait-and-switch, that’s bargaining backwards, rather than forward. We have the weekend to reach an agreement, and if this is how Guelph intends to spend the weekend, I am not optimistic we can reach agreement before the deadline,” she added.

The two sides will continue to meet throughout the weekend with the assistance of a Provincially-appointed mediator, in advance of a lockout or strike deadline of 12:01 a.m., Monday, March 13, and the University’s upcoming College Royal Open House, which takes place March 18 and 19.

“There is a great deal of effort that goes into ensuring our campus is at its very best for the many prospective students and their families who come to the University for College Royal. Now is not the time to be moving backwards. It’s time to get serious about negotiating a fair collective agreement,” said Folk-Dawson.

Following several days of collective bargaining with the University of Guelph, the negotiating team of Local 1334 of the Canadian Union of Public Employees (CUPE) has requested the Ministry of Labour issue a ‘No Board’ report, which has set into motion a deadline by which a strike or lockout could take place.

“Filing the no board was necessary to insure progress continues to be made within an established, reasonable timeframe” said Janice Folk-Dawson, President of Local 1334, which represents over 200 trades, maintenance and service workers at the University.

The worker’s main areas of concern are the contracting out of their work, along with maintaining good jobs and job security into the future.

“These issues have been on going for well over a year. 1334 had served notice to bargain last February but the University did not meet with us until November” Folk-Dawson said. “The entire campus has been subject to reduced levels of service due to unfilled positions and the cloud of uncertainty in the air has added to our workplace challenges.”

Although the University of Guelph has been listed as one of the top ten employers in the country according to Forbes Magazine in 2016, the campus has seen a marked reduction in the degree of cleanliness and general maintenance due to reductions in staffing. “The University continues to threaten to contract out our work, which will result in little or no actual cost savings in the long run.” Folk-Dawson added.

The University has indicated that they “engaged the union in discussions a year in advance of collective bargaining” but these discussions were not actually part of the current bargaining process. During the recent conciliation period, 1334 provided numerous viable alternatives to the contracting out.

The Ministry is expected to release the ‘No Board’ Report today. Once the report is issued, the parties will then meet with the assistance of a provincially appointed mediator prior to the strike/lockout deadline. The earliest possible service disruption would be 17 days from the date the report is issued, which will fall in mid March. 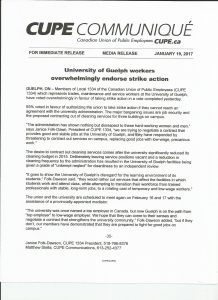 Conciliation is the process of non-binding, third party intervention designed to assist the Union and the employer in the resolution of differences in negotiations, so that they can arrive at a collective agreement.

Usually, when talks reach an impasse one of the parties requests that the Labour Board appoint a conciliation officer to help reach a settlement.  In some cases though, conciliation is applied for as a method to speed up the process or to facilitate a potential strike or lockout deadline.

Need more information or want to get involved? 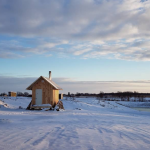