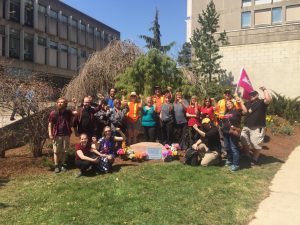 Read at the Ceremony:

Questions From a Worker Who Reads

Who built Thebes of the 7 gates ?
In the books you will read the names of kings.
Did the kings haul up the lumps of rock ?

In what houses of gold glittering Lima did its builders live ?
Where, the evening that the Great Wall of China was finished, did the masons go?

Great Rome is full of triumphal arches.
Who erected them ?

Over whom did the Caesars triumph ?
Had Byzantium, much praised in song, only palaces for its inhabitants ?

Even in fabled Atlantis, the night that the ocean engulfed it,
The drowning still cried out for their slaves.

The young Alexander conquered India.
Was he alone ?

Caesar defeated the Gauls.
Did he not even have a cook with him ?

Philip of Spain wept when his armada went down.
Was he the only one to weep ?

Frederick the 2nd won the 7 Years War.
Who else won it ?

Every page a victory.
Who cooked the feast for the victors ?

Every 10 years a great man.
Who paid the bill ?

There are no upcoming events at this time.